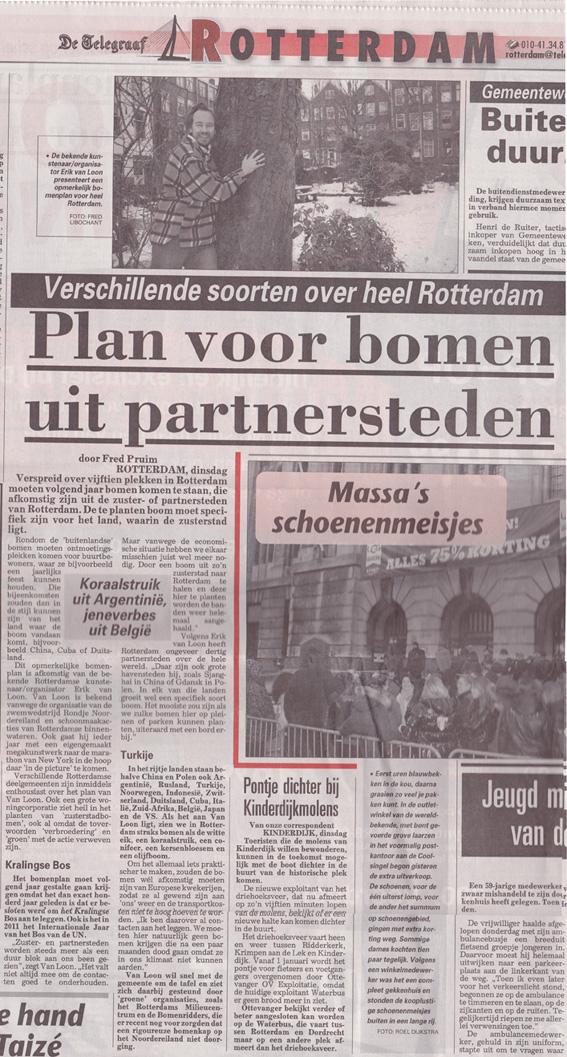 I believe that trees can broaden and deepen the relationship between people, plant and animals. With Sister City we want to show that trees can increase understanding, exchange and cooperation between governments, companies and people worldwide.

In 2011 it is exactly 100 years ago that the city council of Rotterdam and its Major Alfred Rudolph Zimmerman1) decided to build the Kralingse Bos (the original name of the park is Den Kralinger Hout). 2011 is also the UN – International Year Of The Forest.

To celebrate 100 year Kralingse Bos and the UN – International Year Of The Forest we want to plant together with you and the people of our 15 Sister Cities a tree in each borough2) at march 16 (Arbor Day).

You can support us by among others donating money or labour to our plan called Sister City.

1) Mr. A.R. Zimmerman was among others major of Rotterdam from 1906-1923 and Commissaris-Generaal of the League of Nations (precursor to the United Nations) in Austria from 1923-1926.
2) Rotterdam has the following 15 boroughs. In each borough we want to place a tree from a sister city in order to broaden and deepen the relationship with those sister cities and their citizens.
3) Google Earth 6 – Trees