In the New York Times today Joseph Berger wrote a great article about Anne Frank. I have two problems though in one sentence.

“Otto Frank, knowing his wife had died, was also liberated at Auschwitz and returned to Amsterdam to await news about his daughters.”

1. When did he heard?
The end of may 1945 during his trip home (to Amsterdam) he writes in a letter to his mother in Switzerland:
“I hope that these lines get to you bringing you and and all the ones I love news that I have been saved by the Russians, that I am well, and being looked after well in every respect. Where Edith and the children are I do not know. We have been apart since 5 September 1944. I merely heard that they had been transported to Germany.”

He heard during his long trip home (it took two weeks) that his wife was probably dead. By writing “”Otto Frank, knowing his wife had died, was also liberated at Auschwitz and returned to Amsterdam … ” it seems that he know already in the camp.

2 Liberated of Saved?
I don’t agree that you write “Was also liberated at Auschwitz” as Otto writes his mom that he was saved. He wrotes that because Auschwitz was already evacuated 10 days before. Only the sick, dying and hiding people stayed behind. 58.000 people went on a deathmarch. 20,000 of them died due to the cold, soldiers, dogs, exhaustion or hunger. Otto Frank decided to hide himself with some others in the sewer of the lavatories. Most people didn’t hide as they were afraid of the fire and explosions which took place

in the days before when the Nazi’s decided to blow up the gass chambers, the archive and other evidence. That’s why many victim’s decided to march to the other killing camps. Otto Frank was SAVED with 7,650 survivers. Despite the efforts of the Red Cross and the Allies (Russians) 50% died in the days after.

In 2005, exactly 60 years later, I made an 11 hours haunting movie about it called A Victim’s Perspective.

3. Young girl Icon out of context 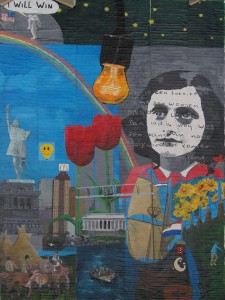 Their is a contradictions in the sentences “Anne also had an intense interest in clothing, boys and Hollywood stars like Deanna Durbin.” and “According to a board member, Yves Kugelmann, the foundation is also unhappy that the Frank house and others have made out of Anne “a young girl icon out of context of the history and her family context.”
In 2009 I painted I Will Win – The History for the New York City Marathon. The History is about 400 years friendship between Netherlands and America and in this painting I painted Anna Frank’s dream to go to Hollywood. In this painting Anne Frank wears a pink sweater and I connected her with E.Y. Harburg song “Over the rainbow”. Many US soldiers sang this song during their marches in Europe.

I know that you always want to write more, it’s not easy to cut in your text. But LIBERATED is not SAVED.

With kind regard
Erik Van Loon