I Will Win – The Alchemist

His 10th and last “I Will Win” painting was originally entitled “The End”. An internal conflict made this impossible. A new breath of life emerged and he decided to change this defeatist title into “The Alchemist”. The Alchemist is an abstract painting in which he paints mankind’s ongoing quest for eternity:
– mankind (the big circle above which combines the Venus ♀ and Mars ♂ gender symbol, represents also Adam and Eve)
– Adam and Eve lost eternal life after they ate the apple and God sent them out of paradise. The apple is the small circle with the devils 666 at the tree in the middle.
– stone of wisdom (small circle below initially drawn by the German physician and advisor of Emperor Rudolf II, Michael Maier (1568-1622)). In his book “Atalanta fugiens’ which he published in 1617 he includes the drawing below. The drawing provides the map to find the Stone Of Wisdom.

The Exhibition 10 Years I Will Win
For more then the last 6 months Erik Van Loon tried to find a space in New York to show his 10 I Will Win paintings. He contacted many galleries and real estate owners/agencies but without result as they all asked him to pay $ 1.000 a day to show his work. At www.erikvanloon.com/i-will-win you will find his fundraising campaign. He designed books, t-shirts and a nice video but nothing helped.

Watch his 2:26 minutes fundraising video below.

American Dream
Erik Van Loon paintings are shown without payment or endorsement from companies or governments organisations. He gets nothing from the NYC Marathon organisation. Yet he lays his painting along the course of the NYC Marathon “mile post 20” in order to inspire the 50,000 runners and 260 million TV viewers in 125 countries for 6 to 7 seconds. If he succeeds he will change Andy Warhol’s saying: “In the future everyone will be famous for 15 minutes” into 6 to 7 seconds. See the neon saying below in his home town Rotterdam, the Netherlands. 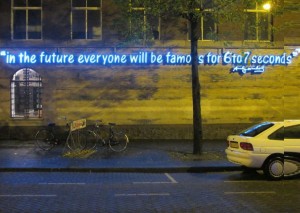 History
In 2005, after the world premiere of his film “A Victim’s Perspective” at the San Francisco Jewish Film Festival he saw for the first time satellite photo’s of San Francisco and other major cities. The use of Google Maps actually inspired him to make an artwork which you can see from a satellite. Although an enormous challenge he did not want to give up hope. However a Nasa analyses that a 33 x 20 ft (11 x 6,5 yd) would be no bigger then a stamp made his dream impossible. It would also cost him
$ 5,000.

Self Portraiture
Inspired by the stamp size analyses of Nasa he decided to use the stamp framework to paint a portrait of himself similair to images used on stamps worldwide. This selfportrait also examplified the tradition of dutch masters painting self-portraiture, such as by Rembrandt and Van Gogh.